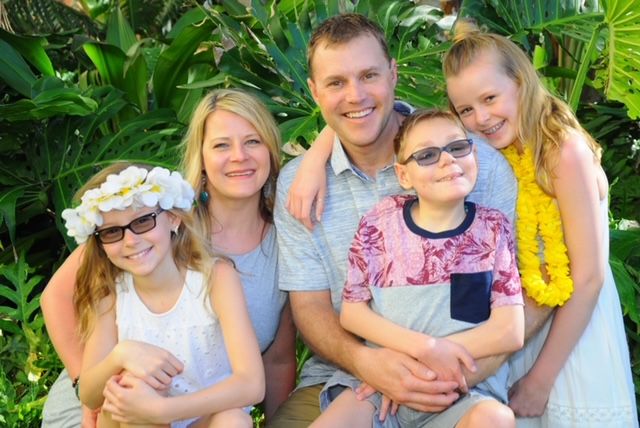 They say it takes a village to raise a child, but when yours has complex medical needs, finding a village can be complicated. April and Jon have been raising Caleb for the past 18 years, along with his teenage sisters Amber and Alivia. “We’ve rarely been apart from our son, so it’s hard to change,” says April. “But we all need to lean on and feel loved by others, and it’s time to allow Caleb the gift of being comforted and cared for outside of our home.”

Caleb was born with a rare chromosomal deletion, resulting in multiple medical issues and global delays. He was diagnosed within the first few months of his life, and April and Jon began researching his condition. Through an online forum, they found a mother in another country whose son had the same condition, but he died at age 4. It was then they decided Caleb would write his own story. They would not compare him to other children. They would not predict what he was capable of based on what others had or had not accomplished. Caleb was his own person. He would take the lead and show the world what his life would be like.

That shift in mindset at the beginning of their journey has been the driving force over the past 18 years. April and Jon have spent Caleb’s life advocating for their son, pushing doctors and specialists to not see Caleb in terms of black and white or what’s on paper, but to see him as an individual full of potential. They’ve helped others see Caleb for the strong-willed, busy, curious, and tender-hearted person he is. The young man who can’t get enough of reading books, loves Mickey Mouse and Disney princesses, has a passion for animals, and lives a purposeful life showing others his gifts.

Now, Caleb and his parents are taking a new step, learning to be apart from one another for respite. In 2021, Caleb had his first overnight stay at Crescent Cove. April and Jon stayed as well, and were able to observe their son in this new environment. “I walked into Crescent Cove expecting to spend the whole visit training the nurses on his care, but they were so knowledgeable and knew exactly what to do,” says April. “To see the children there treated with such love, respect, compassion and understanding was magical. We felt accepted and understood, something we haven’t experienced anywhere else.”

Caleb’s first connection with his new “village” was Crescent Cove nurse Gina. “Caleb is one of the kindest and most patient boys I’ve met,” remarks Gina. “He communicates with ASL, and when his parents weren’t there to interpret, he was so patient with me. If I didn't understand a sign, he took the time to explain it in a way he thought I'd know. Caleb has so much joy and wants to share it with everyone around him. He was eager to tell me about his two dogs and his family. It's clear that there is so much love there, and I can't wait to get to know him and his family more.”

The newfound connection with Gina and all the staff at Crescent Cove will help April and Jon make the leap of a night alone without Caleb, followed by the ultimate goal of a whole weekend respite stay. Jon and April are looking forward to taking their daughters to a cabin to focus on them for a few days. “Our daughters never get the undivided attention they deserve,” explains April. “Every single day revolves around Caleb, and I want to make sure they have memories when they were the center of attention as well. Time has gone by so fast and they’re already teenagers, I don’t want to look back years from now and not have spent these precious moments with them.”

April and Jon are also looking forward to leaning on Crescent Cove to create space for the two of them together. “For 18 years we’ve been juggling it all, and when you divide and conquer every day, you lose track of each other as a couple. We need time to connect with each other.”

Venturing into this new world of relying on others to help may be scary for April and Jon, but they say with confidence that if anyone can do it, it’s Crescent Cove. “Caleb was cared for with compassion, experience, and professionalism that I didn’t know existed,” says April. “Crescent Cove is a place like none other. Everyone is so passionate about their work, you see how special the children feel, and you leave there wanting to be a bigger part of that.”