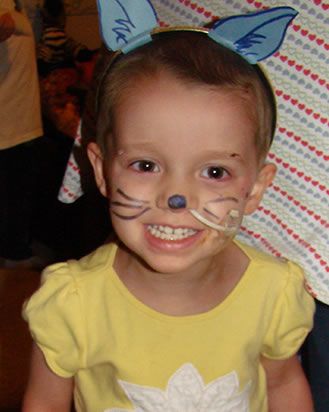 It was winter of 2007-2008 when Mary Jacqueline O’Keefe started getting sick frequently. My husband and I assumed that it was related to daycare and that she may have an insufficient immune system. As a mother, I had huge fears of something more ominous affecting Mary’s health. At the time Mary had just turned 2 years old. We were bringing her to various medical experts through winter/spring without a definitive diagnosis.

By mid-summer 2008 the cancer started to take hold. Mary became thin, weak, and in pain very quickly. It took 2 weeks to determine that Mary had Stage 4 Neuroblastoma. This particular cancer is very aggressive with a high mortality rate. Mary’s prognosis was 30-40% survival.

We brought Mary to the University of Minnesota’s Children’s Amplatz hospital for testing to diagnosis her ailment. The staff at Amplatz was wonderful and was quick to start treatment for the cancer. As a mother I was wondering if I should have pushed harder for more thorough testing complete earlier in the year. Mary’s oncologist stated that this particular cancer is hard to catch. Once the cancer starts, it metastasizes throughout the body versus other cancers that have a primary site and grows at that site first before it metastasizes. Looking back at photos of Mary, you could clearly see the quick deterioration of Mary’s health. Mary was a normal plump toddler, and then 2 weeks later she was frail and thin.

Mary bravely endured 6 rounds of chemo therapy, radiation therapy, 9 weeks on the Bone Marrow Transplant Unit, numerous surgeries, IV treatments, medications to combat the effects of the chemo, and multiple blood and platelet transfusions. Mary was officially diagnosed on July 30, 2008 and then passed away on July 30, 2009. It was the hardest thing to watch as a parent and as a nurse; I could not save or protect my little girl. I felt that I had failed as a parent.

I’m sharing this story to voice the importance of a children’s hospice and respite center in Minnesota. Even though the University did a fabulous job with the resources they had available to a child with a terminal illness, I feel there is a need for additional resources for both the dying child and their family.

Mary died on a Hematology/ Oncology floor at University of Minnesota. The rooms were small at the time of Mary’s treatments (prior to the new Amplatz hospital). A small pull out bed was available to the parents for rooming in with their sick child. There wasn’t hospice focus care for Mary till the end, granted Mary’s cancer came back with vengeance. Getting prepared for Mary’s departure was a whirlwind of activity. Again, this was to no fault of the staff’s efforts. They were doing their best with their resources.

It was hard to walk off the Unit with other pediatric patients playing on the floor. I felt envious of the parents who still had their child living in the physical world and I was leaving the hospital without my child; I was leaving empty handed. A one year battle against this ugly cancer and there was no reward for all the hard work. Cancer won the battle with my daughter and it happens every day to someone’s child. It’s a reality no one wants to face. I hope sharing my story about Mary helps to get the needed support and attention to pediatric end-of-life care.